Cult beauty products are a thing of wonder. They’re simultaneously revered and hated by different members of the beauty community, they’re sometimes notoriously difficult to find, and their ingredient lists/ efficacy/ price are topics that have launched a thousand debates on Reddit.

Because I have an undying obsession with both cult beauty products and cult films, I thought I’d do something different today. So, here are 3 of the world’s most famous cult/ indie skincare products, and their counterparts in film. Fun! Let’s start. 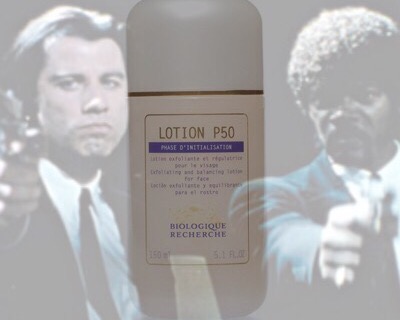 There’s no better place to begin than with Biologique Recherche’s Lotion P50. Arguably, P50 is the most well known cult beauty product out there. It’s got everything going for it: 1. It’s French, and everyone just trusts the French to come up with great beauty products; 2. It’s incredibly hard to get a hold of. Biologique Recherche doesn’t allow online sales of their products, so you would probably have to track down a distributor in your country to track down a bottle (you can do it here). If you’re anything like me, that should already make you want it more.

So what does P50 have in common with Tarantino’s 1994 masterpiece? They’re classics. Lotion P50 is also probably one of the least contested cult beauty products out there in the market today. And say what you like about Tarantino’s later works, but almost everyone who’s watched Pulp Fiction has loved it, and almost everyone who has ever swiped a cotton pad full of P50 across their blackheads has also fallen over themselves in awe.

Basically, everything is there for a reason, whether it’s hydrating ingredients to balance out harsh acids or create comic relief with literal adrenaline-pumping scenes. Lotion P50’s ingredient list contains a generous dose of AHAs and BHAs to literally eat the dead skin off your face with Samuel L Jackson-level vengeance, and enough hydration to prevent your skin from shrivelling up in the face of so much acid.

People have dubbed Lotion P50 ‘Jesus in a bottle’. And I don’t tend to disagree. P50 is hands down the best acid product I’ve ever used. Since using it, I haven’t had any breakouts, my blackheads are disappearing in droves (I’m not kidding — after 3 weeks of the stuff, 30% of my nose blackheads simply disappeared and never came back), my face is purging whiteheads like crazy, and my skin is the smoothest, clearest, and most glowing it’s ever been in my life.

Before you start calling your country’s distributor though, please take note of a few things.

First, many people are turned off by the smell of P50. It smells strongly of vinegar. Personally, it doesn’t bother me, because it is nothing compared to the cup of apple cider vinegar that I drink every morning (that stuff is rank), but I’ve heard the smell of P50 being compared to burning rubber, feet, and embalming fluid.

Don’t worry though, the smell doesn’t linger. Think of it as smelling like your favourite bak chor mee, and it should help you get through the first 20 seconds. The smell disappears after that. Small price to pay for not having alcohol in your toner!

Secondly, do your research before you buy yourself a bottle. There are different versions of Lotion P50 out there, for people with sensitive skin, dry skin, or hyperpigmentation.  So know what you’re getting before you get it. PS: I use the Lotion P50, and I don’t find it too harsh for my dry/ combination skin.

Thirdly, the road to P50 glory requires some commitment. This stuff isn’t what I would call gentle. P50 is serious stuff. If you’re new to acid, you will purge. If you’re a regular acid user like me, you will purge. Purging means you’ll break out in places that are more sensitive, you’ll find blackheads popping up on your nose, and you’ll definitely find tiny bumps (whiteheads) around your jawline and wherever else you tend to get whiteheads.

If this happens, don’t panic. It’s temporary, and it just means the P50 is working. Then, look forward to never breaking out or having white/blackheads again. Small price to pay.

Which brings me to my last point — the biggest price you have to pay is buying the stuff. In Singapore, a 150ml bottle costs around $150. But to get the best skin of your life? Worth it.

Biologique Recherche Lotion P50 is 100% the real deal. The cornerstone of any good skincare regime 😉 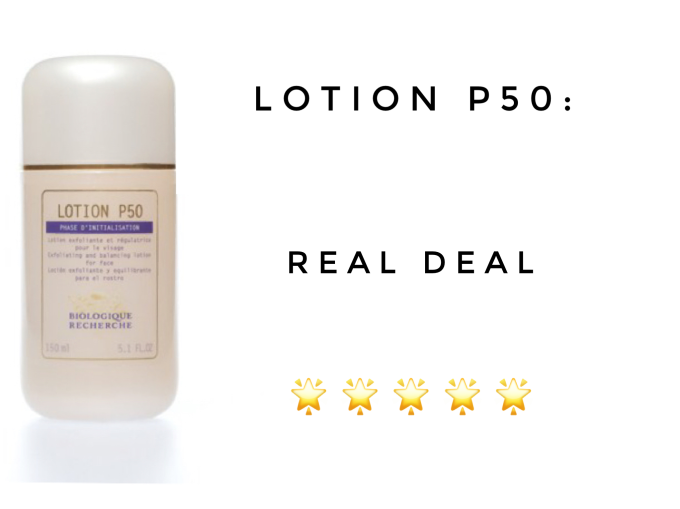 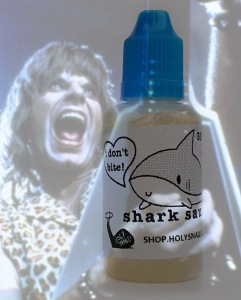 Why This is Spinal Tap? It’s a raw, charmingly unpolished dark horse of a film that put Rob Reiner on the map in 1984, strangely similar to how Chel from Holy Snails shot to fame with what started off as a home experiment. This modest homemade serum featuring 5% niacinamide (shown by studies to be the percentage at which niacinamide, aka Vitamin B3, is at its most effective) simply exploded all over the Internet when it was released in small batches for sale.

What started out as a gift to a niacinamide-obsessed friend (Jude of Fifty Shades of Snail fame) became a holy grail serum that people were camping out for. One Redditor has told the story of how she pulled over on the side of a highway to make sure she could snag herself a couple bottles during a shark sauce launch.

Much as Spinal Tap drew me further and further in with inside jokes, obviously ad-libbed lines, and balls-out charm, I found Shark Sauce comforting to use at the start (so soothing!). The more I used it, the more I fell in love with it, and the more I looked forward to the serum step of my skincare routine. Kind of how Spinal Tap gets better with each repeated viewing.

Here are the beautiful, simple ingredients in Shark Sauce:

I don’t know if it’s the simple formula, the optimal amount of niacinamide, or sheer voodoo magic, but it just works. It’s a mystery worthy of Spinal Tap’s inability to keep any of their drummers alive, but I’m fine to let it be and just enjoy the ride.

I can’t resist saying this either. Shark Sauce has turned my skin barrier up to 11. My skin is significantly less sensitive these days, and just…. way, way stronger than its ever been. The hives I used to get after exercising? Gone. The itch I would get in warm/ humid weather? Well, sometimes I still itch, but at least my skin isn’t red and patchy and gross any more.

Real deal. And at USD38 a bottle, how much more awesome could Shark Sauce be? The answer is none. None more awesome. 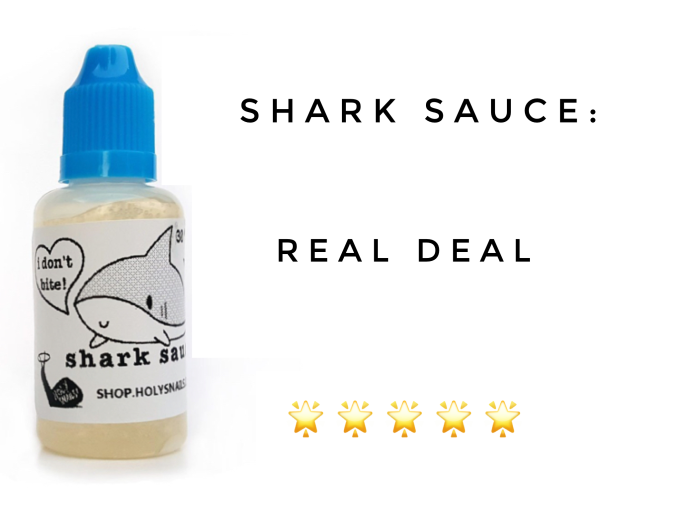 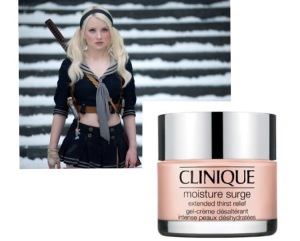 Well, I guess it’s pretty obvious from its film pairing that I am not a fan of Clinique’s famous moisturiser. Everything that is wrong with this moisturiser for me is similar to how I feel about Zac Synder’s hopeful but far from perfect 2011 action-fantasy thriller.

On the surface, lovely. Clinique has great packaging, the name of the moisturiser is amazing (not just thirst relief, but extended thirst relief), and it’s got a hefty list of moisturisers and emollients in its ingredient list.

But, oh dear. Upon closer look, the moisture surge extended thirst relief (gel) has pretty standard and unimaginative ingredients. Water, silicones, and alcohol. Like the awful Sucker Punch script, this ingredient list, the way it makes me break out, and its matte, unnatural finish on my skin makes no sense for a relatively high end brand.

It’s possible that someone else with stronger skin and who doesn’t mind a film of velvety silicone finish on their face all day might have no issues with this moisturiser, but I think with so many great moisturisers out there, you could definitely do better than paying upwards of $60 for this. However, if you don’t mind a matte finish and you aren’t sensitive to silicones, you might like this.

I mean, I’m probably making the Clinique Moisture Surge Extended Thirst Relief sound worse than it actually is, but what really upsets me are high end beauty brands adding a ton of fillers to their formulas and pricing their products so high.

This is reminiscent of Sucker Punch having great costumes and decent set design, but is ultimately all looks and no meat. Works better in theory than in real life. I regret watching the film (more than any other Zac Synder film) and I regret buying this moisturiser. 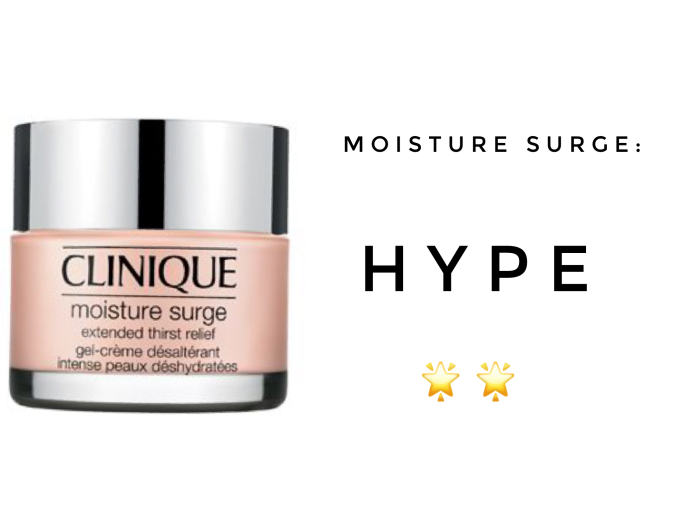 If you’re looking for a good moisturiser, there are many out there. For starters, if you’re looking for a nice soothing and moisturising gel for day or night, check out DrGL’s Restore Gel. I’m also really into my Skylake gel and cream combination for day use too. Bonus about these two? They’ve got real thoughtful ingredients in them.

Well, that’s all for now. But I’d love to hear from you guys: what are some of your favourite cult products, what other products would you like me to review, and what film do you think most resembles your favourite beauty product?